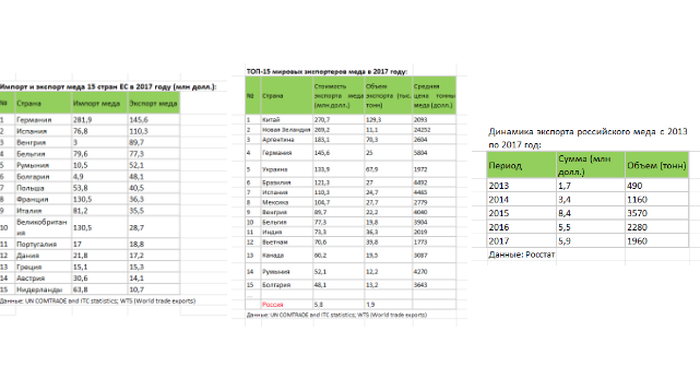 Honey at all times was the most valuable product. Its popularity around the world is stable and not subject to fashion trends. Today in the “honey” market a serious struggle has unfolded between the main players in the “honey” industry.

Last year, the world produced honey for $ 8 billion, of which more than a third was exported, which is 8% more than the same figure in 2016 (Industry ARC data). If China and Germany lead from year to year, then the active increase in exports from Ukraine, New Zealand, Brazil, Mexico and Argentina came as a surprise.

It is important to understand that export statistics for honey is not very transparent. The fact is that to determine the real origin of honey is not so simple. Some European countries buy cheap honey in developing countries, and then it is processed and packaged to sell as its own product, 2-3 times more expensive. As a rule, countries that have high values ​​of both imports and exports do this.

After the collapse of the Soviet Union, Russia experienced 20 years of stagnation in the honey business. With difficulty, we covered our own needs, and we had to forget about export at all. Now we are meeting not only domestic demand, but also fighting for our place in the structure of international exports. In 2017, Russia exported agricultural products for $ 20.7 billion. The share of honey in the structure of agricultural exports was 0.028%. Unfortunately, these are not the indicators that would allow our country to rise above the 4th dozen in the world ranking of honey suppliers. The main reasons for which we can not reach the leaders of the honey market:

The absence of special laboratories certifying honey according to international standards;

The tightening of requirements for the quality of honey from our main foreign trade partner in honey - China.

We will call you back and advise free of charge on the necessary issue.